One of the biggest myths in cannabis that even longtime stoners get wrong is thinking marijuana sativa strains equal a head high, while indica strains zonk you out, leaving you relaxed. This is because many think sativa strains are high in THC, which causes the high in marijuana, while indicas are high in CBD. All of this is completely wrong, except for where high amounts of THC cause the high associated with marijuana.

Now, it is true that different cannabis strains have different effects, with some making you feel more energetic, while others calm you down. But this isn’t happening because of the reasons above. Instead, it’s the same compounds that give all cannabis plants their range of aroma and flavors that’s the culprit. From smelling like blueberries to smelling like pine, then there are some cannabis strains that smell like diesel gas and even cheese; there are absurd range of smells and flavors. It’s all mostly thanks to the cannabis terpenes. And that is just a start at what these incredible compounds can do.

What Are Cannabis Terpenes?

Terpenes are found in the cannabis plant along with many other fruits and veggies. These aromatic compounds greatly contribute to the way they smell and taste. Terpenes, along with terpenoids, are the primary components of essential oils.  If you’ve used essential oils for their therapeutic properties, you’re already familiar with the terpenes.

While our aroma molecules help give oranges their zesty citrus burst and lavender soothing properties, it’s the cannabis plant where you find the highest concentration of terpenes in the greatest range. Giving cannabis strains names like Blue Dream and Sour Diesel.

In fact, cannabis has over 200 different types of terpenes that have unique properties, both aromatically and therapeutically. And unlike many plants, the theraputic benefits don’t stop there. This brings up an important point.

How Do Terpenes Work And Why They’re Essential

Cannabis terpenes work in the body very much like the cannabinoids, CBD and THC, do. They largely interact with one or both receptors of the endocannabinoid system or the ECS. As well, and this is key – as the cannabinoids are more effective at working with the receptors – the terpenes and the cannabinoids interact themselves. This relationship is called the entourage effect, and it’s very significant.

As we said, cannabinoids are the most therapeutically beneficial compounds in cannabis. Which includes both marijuana products that can cause a high, and hemp CBD products that can’t. However, when you pluck the terpenes away and only consume the cannabinoids, their ability to heal and help greatly diminishes. Not only is the range of the medical properties seemingly and randomly reduced, dosing becomes more difficult. Instead of simply taking more for stronger effects – as if climbing a ladder – without the terpenes, cannabis products need a precise dosage. And, it’s such a precise window, that if too much is taken, nothing could be felt, along with if too little is administered.

But when both cannabis terpenes and cannabinoids are together, magic happens. With CBD products and other cannabis items providing an alternative to prescription medication, unlike anything that’s come before. And it’s not even close. 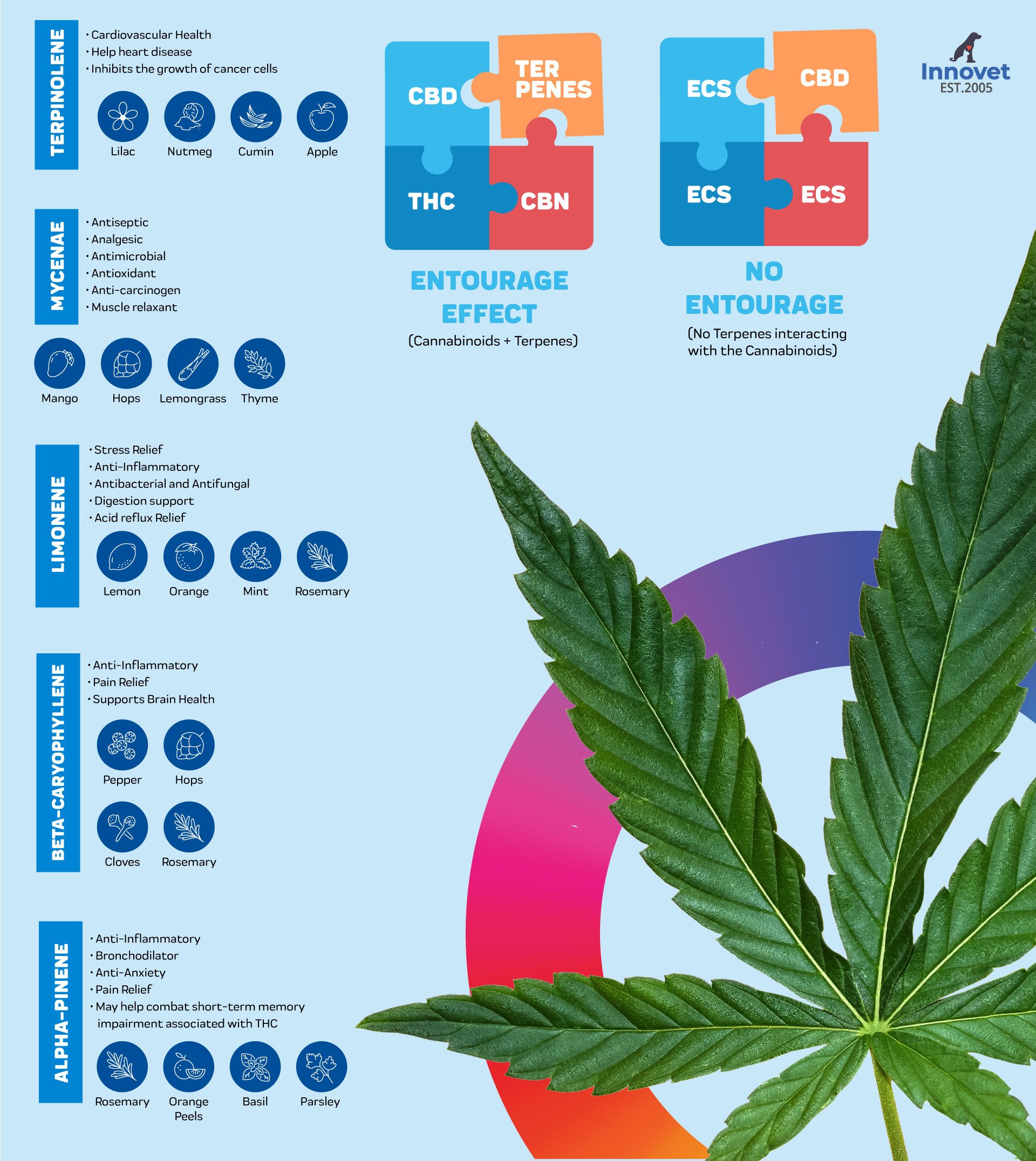 What Are Terpenes For?

Terpenes make up the basis of many essential oils used to help with nervousness, digestion, pain, muscle convulsions, and more. Pretty much every plant produces terpenes for several reasons, including defense against herbivores/pathogens and signals/rewards to beneficial organisms, such as pollinators and mycorrhiza.

What Are The Terpenes In CBD?

In the last few years, research has uncovered a lot we didn’t know about the terpenes in the cannabis plant. While we always knew they had medical properties, we only now understand how important they are for fully bringing out cannabis’ therapeutic properties. As well, we now know that different terpenes have different effects, though many overlap as you’re about to see.

While there are many terpenes in cannabis, many terpenes only appear in very small amounts, making them hard to research. As such, we are only focusing on the top five, which greatly takes up most of the cannabis plant’s terpene profile.

Piney with touches of brightness, alpha-pinene, or just pinene is one of the most abundant terpenes found across different plants. Conifer trees, rosemary, orange peels, basil, parsley, and dill, along with cannabis, are high in pinene. It is the third most common terpene found in the cannabis plant, and while there are few to no strains that feature it heavier than any others, it’s commonly the second most abundant terpene in many cannabis strains.

Peppery and spicy, Caryophyllene was the first terpene we discovered that could activate the cannabinoid receptors similar to the cannabinoids. It’s the second most abundant terpene in cannabis though it’s a close race between it and pinene. Found in black pepper, hops, cloves, and rosemary. 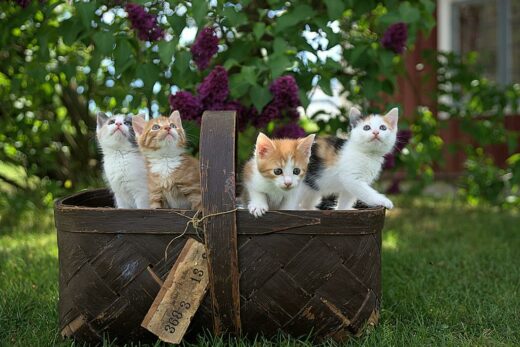 Cat Years | Do You Know How Old is Your Cat? 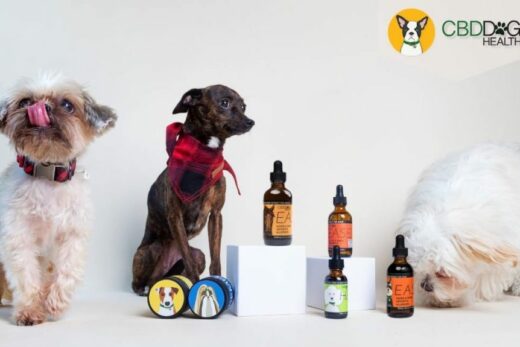 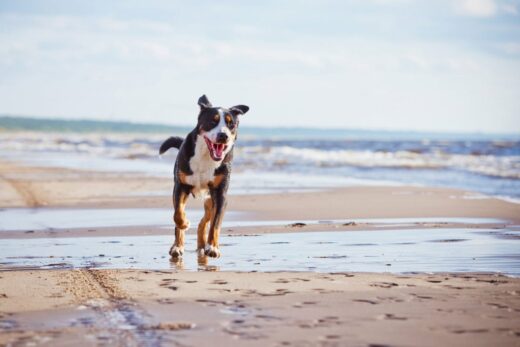 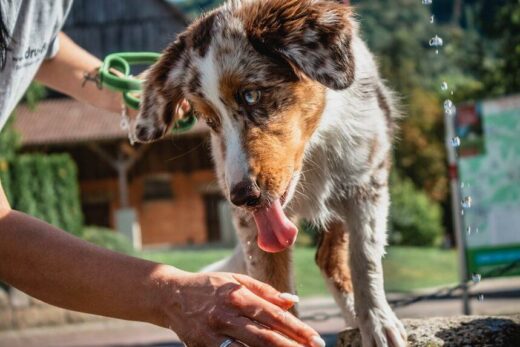 Can You Use Human Shampoo On Dogs?